Nice day. We had our morning coffee and showers. Cleaned the boat, filled the water tanks, walked the dog. At noon, we moved the boat from the Apalachicola Marina to the anchorage across the channel. I started a painting which reinforced to me the need to do color studies. It takes me way too long to create the color I want. This would be like practicing scales on a musical instrument. Not fun but necessary.

Today we are preparing the boat for our Gulf passage tomorrow. The passage will be approximate 21-30 hours. Think of it as driving a car, someone will always be driving. Once an hour we will need to plot our position on a chart. One of us will be sleeping and one manning the helm.

We woke up this morning to find no gas for the stove and refrig which means NO COFFEE! Soon resolved switched gas tanks, however, that means we have to find a refill today. No biggy if you have a car, but we will need to take the gas tank in the dinghy to shore carry it 4 blocks and back.

Woke up early to hit the high seas at day break. Winds should be out of the NE with 0-2 foot seas. We broke anchor and motored through the bay for a few miles, then through the Government Cut to the Gulf. Hmmm, forecasters were wrong again. East Winds with the largest waves I have ever been in in a boat. Ok, now I have a knot in my stomach from fear of the unknown – are we safe… and is it going to be like this for the whole trip? I consulted with the Captain about our safety. No problem with safety, but it will be a rough ride to our destination.

A mile or two out, one of the lines holding the dinghy davits in place breaks free. Luke decides he is going to fix it NOW! YIKES! He puts on his PFD and straps himself to the boat and proceeds to lean off the back end over the motor in the highest waves I have ever experienced. I put the boat on autopilot and grabbed hold of his PFD (personal floatation device) and held on to him. He fixed it and returned to safety.

We motor sailed the whole way, meaning we used the sails and motor to increase our speed. Most of the time we were at about 4.5 knots. At one point, the wind did shift in our favor (midnight-3am) and we were able to run at 7knots.

At the furthest point offshore, we were about 60 miles off shore. No land insight. Occasionally, you will see a boat of fisherman. The seas were so rough that I would never have been out in one of those small fishing boats, yet there they were.  We also saw many different jelly fish and a few sea turtles. One turtle was humongous with seaweed growing on its back. His head was larger than a cabbage. Huge! Pink Meanie jelly fish look like very large pink beach balls. I expect from their name they should be avoided. We also so the V tower which is there for the Dept of Defense, interesting.

We setup a blowup mattress in the salon so whoever was not on watch (driving) could sleep close by just in case of emergency. It worked well because it cushioned some of the bouncing from the waves. I never slept more than an hour when off watch. So I had about 3 hours sleep in 36 hours. Luke was able to sleep from 3am to about 6a.

OH MY STARS! THE STARS!  Until you have seen the stars on a moonless night many miles from other lights you have not really seen them. Amazing! My father taught me about constellations and the north star, but I could not remember much of that, but it was a nice to remember my dad while cruising through the Gulf. My dad loved the water and had wanted a sailboat. Here’s to ya dad! He gave me my love of the water, boating and instilled the need for caution and safety. Luke and I both wore our life jackets and had our ditch bag ready with water and food to go to our lifeboat if necessary.

Still in the middle of the Gulf – 4am Ozzy decided that he needed to GO! He was determined to go to the fore deck to pee. No way, that is not happening. He pulled on his leash and moaned and moaned. I kept putting him on his pee pad in the cockpit and finally, he let loose. Ozzy’s emergency (he had been holding it for 20 hours) was happening when I saw red flashing lights and the wind was changing direction. I was getting stressed because, red flashing is a marker for a channel, but we are miles from nowhere. Then the light seemed to move around as if it was floating in a circle. Yikes! Am I seeing things? It has been a long night staring into the distance where you cannot even tell where the horizon is located.

The boat is on autopilot, so I go below to consult the charts. The only marker it could be it Cedar Key or the outer channel marker for Crystal River. Whoa! This is above my pay grade, so I roused the captain to take a look. We figured out that the floating lights were actually 3 different markers that were lined up in a way that when they flashed it appeared that one marker was moving. Phew, thought I was crazy.  We are still on course.

Now back to the wind, argh, yes it changed which meant we went down from 7 knots to 4 knots cruising speed. The sails had to be adjusted. Luke took down the jib and then went back to sleep.

Daylight arrives and the seas start to calm down. Luke wakes up and he decides to mess with the fuel tanks. Good Lord, we are in the Gulf, can we not wait to fix stuff when we stop? We were concerned that we might run out of fuel. When running on the starboard fuel tank that engine dies. Lovely. That was resolved.

We are now heading to the outer markers at Crystal River, but we need to change course to avoid a reef. The fog is rising and a morning shower is building. I see large images on the radar in the middle of our course. Luke thinks it might be rain. I put a special marker on the images so we could track their movement. They stayed. We were now watching the distance for what this could be when out of the fog at about a ¼ mile appears a huge barge. Thank you radar! There were two of them anchored just off the channel.

Barges appearing out of the fog. Fortunately, we have radar.

Crab traps everywhere and we were asked to leave the channel to allow room for the barges. We are now navigating around crab traps and going directly into the sunrise. Fortunately, the crabbers have placed the traps in long lines so we were able to get between them and continue on course.

3pm We made it to Shell Island at the mouth of the Crystal River. We anchored and relaxed. Ozzy was happy that we were close to shore. Got him in the dinghy and went exploring on the island. Later a quick dinner and a well deserved good night sleep.

Rested at Shell Island. Painted and read. The scenery here is absolutely gorgeous. 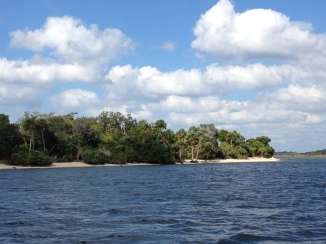 The painting is a color study of a small island across the river from Shell Island. the photo is of Shell Island.

Moved to a couple of miles up river to Twin River Marina so JD, the mechanic, can check our fuel tank issue. The marina had limited services, but they did have ice cream and friendly staff.

Moved to Kings Bay in the town of Crystal River. Very pleasant here. Anchored in a no wake zone for the manatees. We have seen one manatee off the bow of our boat.

Got up early and prepared to go to shore. Laundry and grocery shopping are on the list. We all loaded up in the dinghy with my folding bike and laundry. Luke walked Ozzy and I biked to the laundry mat with a load strapped to my back. It worked well. When the laundry was done. Luke met me at the dock to pick up the load. I then turned around and went to the grocery store, about 2 miles. I found that the top basket of the small two basket buggies is all I carry back to the boat.  I also found that I will be carrying my bear spray. A woman walking her dog lost control of him when he decided to chase me. Why do people have animals that they cannot control.

My Citizen folding bike and a load of groceries.

Our friends for Micanopy, Bill and Eileen, came to see us. We had a nice dinner and the next morning they graciously took us to Walmart, Walgreens and Winn Dixie. They also helped us find somewhere to dispose of our trash.

Very busy in the bay over the weekend. Tourist renting pontoon boats to motor around and look for manatees. Also, lots of kayakers and paddle boarders enjoying the bay. Later Saturday, the Stone Crab Jam ramped up. The music from the festival wafted over the bay until about 10pm. Ozzy and I explored a couple of the springs and had fun just putting around in the dinghy.

Laundry day – I biked to the laundromat forgetting that Monday is wash day. Very busy today. Luke and I decided that we may have brought too many clothes. Too much to wash. I will have at least one more load to do before we leave Thursday. Later in the afternoon, I biked to Winn Dixie to start provisioning for our next passage to Tarpon Springs.

← Front Row Seat
No Wake, No More And More →